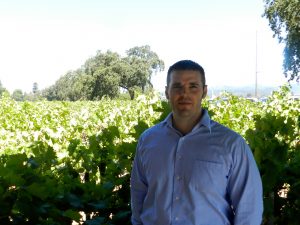 When citing movies that inspire someone to take up a career in the wine world, films like “Bottle Shock” and “Sideways” are some of the first to come to mind. Though if you ask that same question of Dustin Harland, our wine club coordinator, he will answer with “The Karate Kid,” “Transporter” and “Taken”… None of which are about wine at all, though they do share a common thread with the wine business through their screenwriter Robert Kamen.

When Dustin was growing up in Sonoma he swore he would never work in the wine business. Tired of seeing the fields of vineyards and stacks of barrels, he wanted to stay away from a career path that surely guaranteed more. Then, one of his best friends called him to share an opening at Kamen Estate Wines in Sonoma. Dustin figured he could parlay a job with Mr. Kamen into an interesting future filled with his favorite movies. Soon enough he was working in the cellar for the screenwriter and his outlook on wine started to change. He found a new love for the rows of grapes and cellars full of oak.

Fast forward a few years, and a few wineries, and Dustin was looking for a new position in Napa. He had been running a wine club at a smaller winery in Sonoma and wanted the challenge of going bigger. He found that position at Whitehall Lane, where he was welcomed with open arms as part of the family. Almost two years in, he says it’s the people he gets to work beside daily that keep him happy and moving forward.

Our wine club has grown every year with members seeing better wines and events to keep them coming back for more. Dustin is excited to share some exclusive library wines with members this year. There are a few bottles in the cellar that were held back from older releases just for members, and they’re some of the finest examples of our work. A proposed “Mafioso-” themed dinner event this summer has him excited as well.

Over the past few years our wine club members have built a great relationship with Dustin. Before each club shipment, Dustin works with club members to customize their shipments according to their preference. He also has the pleasure of helping them pick out wines for their family weddings, suggesting great restaurants and hotels in the area, and truly getting to know the guests that visit the winery. Sharing a bottle of great wine and a good story with guests has become one of the most enjoyable parts of his time at Whitehall Lane.

As a young child, Dustin saw his dad work as the head cheese-maker for Sonoma Cheese Factory, which his family owned. He enjoys seeing that same family-run tradition here at Whitehall Lane and not working for a big corporate company. Until Dustin decides he wants to try his own hand at making wine, he loves drinking the Millennium Cabernet.

If you want to get to know Dustin a bit more, read up on our wine club and join the level that’s right for you. Our last shipment included Las Brisas Pinot Noir, Tre Leoni and a library bottle of 2007 Merlot. Of course, you can customize each shipment before we send them out so you always get exactly what you love to drink!