A “cellar rat,” as they are affectionately named, is a person who works in the cellar crew at a winery. Fernando Cortez has been the head of our cellar crew for 21 years. That’s longer than the Leonardini Family has owned the winery!

Fernando said this is a season of long working hours for the cellar crew; days typically begin at 6:30 am as they await the arrival of grapes that have been picked in the early dawn hours.  Work days are seven days a week, and 10-14 hours per day, with an average day bringing in 25-30 tons of grapes to be crushed.

Beard growing contests at Whitehall Lane?  Well, this popular contest didn’t start out intentionally. The tradition came during harvest season when our crew didn’t have the time to shave very often, and if they find the time, they were just too tired!

But there are some breaks during harvest for this crew.  Suppliers of our glass bottles, our cork, and Whitehall Lane faithful fans love to bring them lunch as a gesture of appreciation.

They also eat meals together (sometimes all three meals in a day) as a family.  Each Sunday the crew feasts on menudo, one of their favorite dishes.   Menudo is a traditional Mexican soup made with tripe in a red chile-based broth, topped with lime, onions and cilantro. 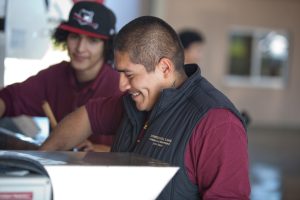 And as the old saying goes, “Great wine making requires lots of beer,” this is at least partially true with our crew.  After a long day, nothing tastes better than a refreshing beer.  Any light beer will do, but Corona and Modelo are favorites at Whitehall Lane.

With Fernando’s years at Whitehall Lane also comes wisdom, which he passes on to the younger members of his crew.  The long hours equal great pay, and the harvest season doesn’t last forever.  When they are finished with the season, they all feel a sense of accomplishment.

They are also adding to their skill set in the industry of wine making.  Fernando still says he learns something new each season.  They also know that a long vacation in December awaits them.  Much of the crew go to Mexico to visit their extended families for a few weeks.  When they return in January, their days will be regular 8-hour shifts allowing time for their family and friends.

Fernando’s greatest joy is working with the land, nature and science, with the end result being a great bottle of wine for Whitehall Lane fans to enjoy. Oh, the life of a Whitehall Lane cellar rat!