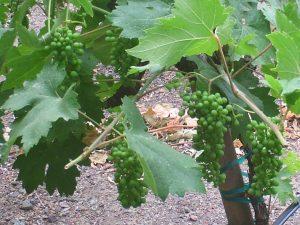 While premium wines are produced globally, nearly one-half of all the wine produced in the world comes from France, Italy and Spain, and 80% comes from the world’s top 10 producers. According to Wine Folly, here is a list of the five top wine-producing countries are as follows.

Now, let’s take a look at the various varietals around the world and the best places to grow the different types of grapes that are used for winemaking.  These grape-growing regions of top five wine producing countries.

Merlot is a dark blue grape, which originated in the Bourdeaux region of France. Merlot usually produces a soft, medium-bodied red wine with juicy fruit flavors. It is frequently used to blend with other varietals, including Cabernet Sauvignon and Cabernet Franc.

Grenache is a red-wine grape that is one of the most widely distributed grapes in the world. It is grown in France, Spain, Australia, and the United States. In Spain, where the grape grows extensively, it is also known as Garnacha.

Sangiovese derives its name from the Latin term “sanguis Jovis,’ which translates to “the blood of Jove.” The grape is found in many parts of Central Italy, ranging from Romagna down to Lazio, Campania and Sicily. Recent research suggests that Sangiovese is derivative of Cillegiolo and Calarese Montenuovo

While the white grape is aligned most often with Italy, Trebbiano is among the most widely planted grapes worldwide, as strains of it have been found in Spain, Argentina, Australia, Bulgaria, Spain, the U.S., and Portugal.

Trebbiano is a black grape often used to make full-bodied red wines. While indigenous to Spain, The grape has been planted throughout the globe in places such as Mexico, Argentina, Australia, New Zealand, Canada, the U.S., South Africa, Portugal, Turkey, and Uruguay.

Airen is a white grape that usually is only used for winemaking. While the grape is native to Spain, as of 2010, it was estimated to be the world’s third most-grown grape.

Although Napa Valley only accounts for 4% of wine grapes grown in the state of California, it remains the most recognized region for wine growing. However, being blessed with a Mediterranean climate, Napa Valley grows more wine grape varieties than any other region of similar size in California.

Chardonnay is a green-skin grape that is used to make white wine. Although it originated in the Burgundy wine region of Eastern France, it is grown wherever wine is produced, from England and New Zealand.

Cabernet Sauvignon was born upon chance when Cab Franc crossed with Sauv Blanc. Along with Chardonnay, it is what California’s Napa Valley has become known for.  Complex and hearty, the taste can vastly vary based on vintage and region. An earthy varietal with blackcurrant undertones, its bittersweet taste is the most distinguished characteristic.

Malbec is a purple grape that is used to make red wine. It is among the six grapes that is allowed to be used to make red Bordeaux wine. While it is becoming known as an Argentine varietal, Malbec is found in Cahors and South West France.

Other stories that you might like
Uncorked: Beachfront "Winemaking"
Valentine's Day Red Wines
"Happy birthday — to us!" Whitehall Lane Winery Celebrates 20th Anniversary